I just published a new edition of Mastering ArduinoJson. The text is the same, only the layout changes. See below for a before/after comparison. 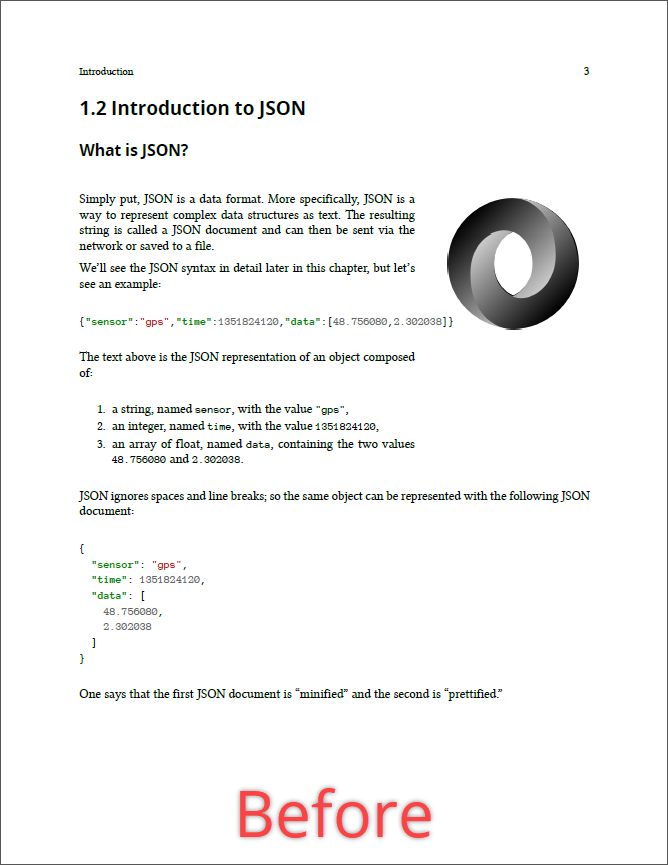 To do that, I had to give up on the automated tools provided by Leanpub. Indeed, while Leanpub allows you to get started quickly, it also limits you in what you can achieve. In particular, Leanpub has minimal customizations; you can barely change the page size and the font. To add adorners to headings or fancy headers to pages, you need to switch to other tools.

In my case, I decided to use LaTeX to generate the PDF version. I initially tried to use Pandoc to keep the original Markdown files, but I was not satisfied with the result. I then tried to write directly in LaTeX, as I used to do in school, but I was such a pain that I decided that I’d use LaTeX only as a rendering engine.

I followed the advice of Martin Fowler, who does all his writings in XML, except that I used HTML. I wrote a Python script to convert the .html files into .tex files with the customization I wanted. This task was made easy by the library Beautiful Soup, which converts an HTML document into a navigable and editable tree. Then, I wrote a second script to generate the .epub.

Boy! That was a lot of work, but I’m very proud of the result, I hope you’ll like it. Please download the free chapter and see by yourself.

One last thing, I raised the price tag a little, but you can get to the old price with the coupon code THIRTY.